I read about that somewhere, that the steeples on churches are phallic symbols. 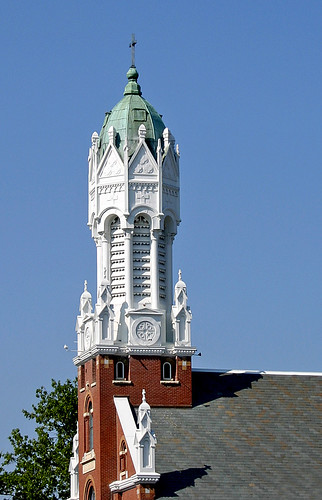 Now I don’t spend a lot of time sitting around analyzing church steeples, but I’m parked outside a church with nothing much to do.

And, yeah, when you really look at it, it does look like a penis. I wonder if the people inside realize their building looks like it has a hard-on?

Why people want to spend a beautiful day like this inside the penis building I can’t figure out.

Then again, that God stuff’s pretty important, if you believe it. I suppose if I thought my ass was going to roast forever if I didn’t waste my weekend morning sitting under a giant dick then I’d be in there too.

I mean, I know my ass would get kicked out of my apartment if I didn’t waste my weekdays sitting at work. Must be the same sort of thing.

And here I am wasting my morning sitting in the car. I’ve got the windows rolled down, so there is that. I haven’t been sitting here long, and it’s almost time for the people to come dripping out the front door.

Teddy’s being patient too, so I don’t have a screaming kid to deal with.

He’s a good kid. I told my sister she was being a real bitch giving the poor kid a name like that. She trotted out the whole carry on the family name bullshit. Well that’s all fine and good if you’re completely wrapped up in yourself like ol’ Theodore. But you’d think having lived with a dumbass name for thirty five years you’d know better than to give it to a kid you supposedly cared about.

They could at least call him Theo. I tried calling him that but he’d look at me like he didn’t know who the hell I was talking to – makes sense – so I call the poor bastard Teddy. When he gets older I’ll explain to him that he has a dumbass name and that’s why I call him Theo.

Anyway, my sister was more than happy to lend him to me this morning. Not that she knows what I want him for. She’s just happy to get a break from the barfing. Teddy loves to tag her as soon as she’s got a new shirt on. He never barfs on me. Damn smart kid.

So I’m out here cause I’m playing a trick on Martha’s ex, Doug. He’s the preacher in yonder penis building. Apparently some of them are allowed to do that sort of thing. Date, I mean. But no sex.

So why Martha was with him in the first place I’ll never understand. She’s always been in a guy’s pants faster than he can say “hey baby.” She says preacher-man let her go in, but he wouldn’t go in if you catch my drift.

Anyway, he dumped her. Probably because he had blue balls with all her groping, but Martha says she was in love with him and she was willing to wait – she’s not the one who has to deal with the permanent erection – but he dumped her and she wants to pay him back.

Good enough for me.

Teddy’s playing with the dirt in the floorboard of my car but he’s happy enough to come along when I pick him up. And he’s pretty damn cute so he’s a good partner in crime for something like this.

I stomp toward the building, trying to look pissed off. Teddy’s giggling cause it’s bouncing him up and down but I figure that’s a good thing.

Now I’ve never met this Doug. I know Martha’s my best friend but they only dated two weeks and it’s not like I’m up her butt all the time. He’s supposed to be easy to pick out, wearing one of those collar things.

So that must be him. Hmmm, not bad looking. Still.

I stop dead in front of him and plop Teddy right into his arms as he’s going to shake hands with this really old man.

“It’s your weekend, Doug, can’t you at least take your own son ONE weekend a month?”

I figure it’s polite not to cuss in front of old people at church.

Dougie’s white as a sheet. Ha! I knew this would be fun.

“Excuse me, I don’t know you and this is not my child.” He looks around at the growing crowd. “Not that he isn’t a lovely child. I’m sure you’re very proud of him, Miss, but I’m afraid you’re mistaken.” He must have figured the nicey-nicey bit would make him look better.

So I start crying. I can do that. It’s a useful trick.

“How can you say that? And in front of God!” I wave my hand in the direction of the huge wanker.

“Miss, please, if we could talk about this elsewhere?”

“No! We have nothing to talk about! You’re a heartless bastard and I never want to see you again! We’ll be just fine without you!”

And Teddy ralphs all over the guy’s suit.

It’s nasty too. Chunks of the cheese puffs I let him have in the car, mixed with formula. Oh man I want to laugh so bad but I can’t ruin Teddy’s moment of genius.

I jerk Teddy out of Dougie’s grip and stomp away. “Serves you right!”

When we get back in the car I give Teddy a high five. He doesn’t know what I’m doing or anything but he grins at me and he’s still got nasty little barf chunks all over his chin.

The kid’s got potential. Yep, definitely a Theo.