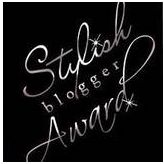 The other day I was awarded the Stylish Blog Award by my new blogging friend Corinne O’Flynn.

I met her when she found my blog contest to reach 100 followers. Turns out she was running one at the same time and… I WON IT! WooHoo! I got me a fancy new book and some Girl Scout cookies. Mmmmmm… heaven.

So now, as per the rules of this pretty little award, I get to share with you some of my new blog friends, whose blogs you might find entertaining and informative.  But first I am supposed to share 7 things about myself. Well, prepare for the boredom, and then skip to the cool stuff about the other great bloggers below.

1. I’m scared of whales. Like phobia-scared. I don’t know, so don’t bother asking.

2. I’m a gamer. I play a priest and a mage on World of Warcraft, depending on whether I’m feeling nice or kick-ass.

3. I knit. And it didn’t turn me into a stodgy old lady. Actually, I’m much cooler now. (Relatively.)

4. More than anything, I hope my kids remember the goofy stuff we did; like the time we played mini-golf in the rain.

5. I write for the same reason I recommend books I love. I want to share the worlds and characters I’ve fallen in love with.

6. I honestly don’t get much of physics, which makes my decision to write sci-fi with a cutting-edge physicist for a main character rather puzzling.

7. Every time sex is mentioned in church I can’t stop giggling. Hee, hee. They said “sex.”

Now for the good stuff:

Five bloggers to recommend is a no brainer for me because this month my 5MinuteFiction contest is on tour and five fabulous writers and bloggers have taken up the arduous and totally fun job of hosting it for a week.

1. Claire LeGrand, @clairelegrand Claire’s a talented MG/YA writer newly agented with Diana Fox. She’s hilarious as all hell. Her blog’s well worth the read just for the entertainment value.

2. Monica Bustamante Wagner, @Monica_BW Monica’s also a YA writer, newly agented with with Michelle Wolfson. She’s about as sweet as she can be, so I can’t wait to watch her rocket to success.

3: Richard Wood, @rbwood Richard’s another talented writer, this time Urban Fantasy, and the host of The Word Count podcast which you SHOULD be listening to because it’s just that good.

4: Robert James Russell, @robhollywood Rob’s the hardworkingest writer and the editor of a new lit mag, Midwest Gothic. He’s also the editor of an anthology I was privileged to be a part of, Sex Scene.

5: Sam Adamson, @FutureNostalgic one of the authors involved in the collaborative writing project, The Splintered Lands. Check it out because it’s a great concept with some great writers.

So now that you’ve met them, you should really follow them. You won’t be sorry.

Thanks again, Corinne, for the award, and best of luck to all of you!