In honor of National Grammar Day, here’s a re-run of a flash piece:

I’ll admit, I had a reputation. I was the Comma slut. They all knew I was easy with the Commas. Well, you live and learn, right? 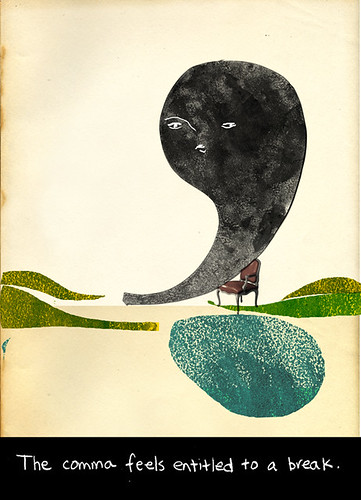 I had one of those epiphany things and fell for the respectable, mature Semicolon. We’ve been together a long time now; it’s been good. But I’m beginning to realize he may just be an enabler; that I really haven’t changed my profligate punctuation ways at all.

As much as I love him, Semicolon’s never been quite enough; I’ve managed to hide the affair with the Parentheses for a while now. (Yes, it’s so cliché, the hot encounter between the mysterious twins. You’d do it too if you thought you could get away with it.)

Thing is, I met Em Dash at a club the other night. He showed up with En-Dash and that should have been my warning right there. En-Dash is always trying to stick people together.

I really was just there for some innocent(ish) fun. It was Colon’s birthday and, come on, she’s as solid and predictable as they come — I’m still not quite sure how we talked her into that particular armpit anyway.  (I think exclamation point had something to do with it.  She’s so damned excitable sometimes you just do what she says so she’ll shut up already!)

So there he is, so dashing and exotic. Jesus but words just failed me – and I really hate it when they do that, the bastards. But Em Dash. So flexible and, well, don’t kid yourself, length does matter.

Apostrophe almost saved me. He’s such a spaz, always showing up everywhere, butting in, all OCD about everyone’s possessions, always there when someone drops something, and then bitching about everyone using him too much. Maybe I knew Em Dash was trouble for me and did that Freudian thing ’cause I dropped my purse twice and there’s Apostrophe, right there where it fell. “Hey hon’, it’s your purse again.” Yeah. And Em Dash looked away.

But I touched his arm and he was mine again. I shouldn’t have done it. I should have turned to Period. He was right there, and he’s seriously straight-laced. Just so definite and absolute about everything. I could have used him as a full stop to the whole situation; a cold shower. I didn’t.  I couldn’t. I didn’t stay until the morning, if that matters. Ellipsis came to pick me up at god-forsaken a.m. because she’s a sucker for innuendo and I didn’t tell her… much.

I don’t have his phone number — cause I didn’t ask for it, so wipe that smirk off your face.

Call me whatever you want; it’s my life not yours. And my sentences thankyouverymuch.