Did you think of the other “duck” than what I chose for a picture? Yeah, I did too, actually, so I thought I’d mix it up. Looks like it influenced a lot of the entries. Well, let’s transition to something a little less, you know, depressing. How about cute:

Of course you do, but that would be getting ahead of ourselves. You know how this works. First there are finalists. 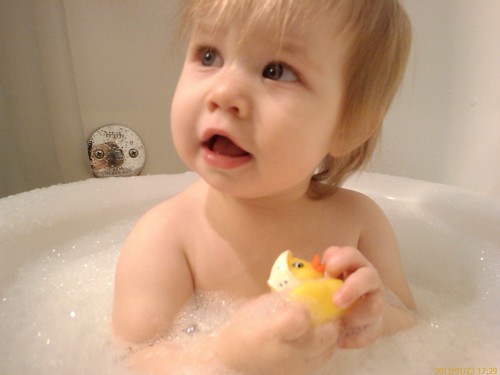 Then we vote and tomorrow we find out who wins. So, here are the finalists’ entries. Read, then vote. Send friends. (If you have any. If not, we won’t tell anyone. Probably.)

That’s all there is to it. Don’t forget, this week, guest judge Kathryn Magendie, Author, and Publishing Editor, Rose & Thorn, @katmagendie will give a copy of one of her novels, Tender Graces or Sweetie, to the winner! See you tomorrow morning at 9:00 Eastern!

“Duck, duck, duck…” i watched the small girl with brown hair circling her friends. She’d already gone all the way around once and they were all shifting, knowing she would pick someone on this round.
“Duck, duck, duck…” She finished a second round and I took pity on those still patiently sitting.
“Louise! Pick someone!” I shouted from the park bench I sat on.
She scowled at me as only a pre-schooler could. Then she stuck her tongue out. I raised an eyebrow. She knew better than that. She looked down at her feet but spun and returned to her circle, going faster.
“Duck, duck, goose!” She yelled the last and used her speed to whirl around the group and back to the first spot. The boy she had chosen, Nick, complained.
“That’s not fair, Louey!” He had trouble pronouncing esses.
“Yes, it is,” Louise insisted. “Ask.”
All the girls in the circle tittered, but the boys didn’t come to Nick’s rescue either.
“Fine. Duck, duck, duck, duck, Goo!” He thumped Louise hard on the head and ran.
“No returns!” she complained.
“All right everyone, that’s enough. Let’s go inside and paint.” The class scrambled up, rushing the door.
“Jane, Nick hurt me,” Louise complained, rubbing her head.
“Next time don’t pick on him,” I answered without sympathy.
“But…” a little colour came to her cheeks. I tried to remember being so innocent, showing affection by thumping a boy or kicking at his feet, or picking on him in a game.
“Hey,” came a familiar male voice.
“Hey,” I answered my coworker.
He reached up and tugged my ponytail, hard. Frowning, I realized just how close those feelings still were.

In the movies there were strong arms and tender words to shelter from disaster, but the table legs are nothing like limbs. Paired together, two and two, they feel like a cage, like naked tent stakes waiting for a show. But there aren’t any shows anymore, no circuses, no movies, either.

The whispered agitation of your bunk mates, your CO, ring and rattle against the linoleum and concrete and steel of the shelter where you live, where some of you may die. But maybe not today.

Your CO’s shout is swallowed by what sounds like hell from above, bone and stone shattering sounds. You press your face against boots two sizes too small, dirty ankles and the stink of too many bodies too long underground, but you can’t get any lower.

It had to be today. Couldn’t have been yesterday when I had on my worm-digging jeans. Oh, no, it had to be today.
All dolled up with my mom’s idea of what a “proper young lady” should wear to school.
I sometimes wondered what the purpose of being proper was. Whatever, it certainly didn’t seem like all that much fun. I liked having fun, so I guess when I grew up I’d stop wearing dresses.

That creep tommy just poked me in the butt! the BUTT! I started to holler but Miss Pemberton said “shhhhh! everyone stay as small and as quiet as possible. Hide. Duck under your desks. Try as hard as u can to pretend you are invisible.”

Easy for her to say, she didn’t have Tommy staring up her dress and poking her with a ruler. Besides, my joints were getting sore from crouching.
I looked up at the teacher and then I saw her suddenly drop to the floor like a sack of potatoes. Miss Pemberton was never ungraceful. I used to consider her a captured ballerina, forced to teach social studies to dull children. That kind of fall was not her usual dance move.

Somebody started whimpering. I screwed myself around, trying to see who it was. Marcy was trying not to cry, and she looked so full of terror I had to find out what she was scared of.
That’s when I saw the slow pool of red moving away from Miss Pemberton’s head. Her eyes were wide open like a doll. There was a dirty smudge in the middle of her forehead.

No, not a smudge. A hole. Our teacher was dead.

We all kept as quiet as possible.

When the door slammed open and the booted feet came into the room, we all ducked. But of course, by then it didn’t matter. The soldiers had already seen the teacher in the window.

I got to ride in the back of the prisoner transport. One of the soldiers even gave me a chocolate bar. But I wasn’t hungry. I wasn’t anything. I just looked out the slats of the truck and watched the brown and black hillsides pull away from me. We drove past the pit that used to be my farm. It all slid away from me. I didn’t wonder one bit where we were going.

Years later, scarred and toughened, I saw the teacher through the window. Then I broke in and got the new recruits.

The sound of digging started in earnest once her brothers figured out where she had disappeared from the trail. There were only two possible options for her disappearance – up or down. Since they couldn’t follow her up, if that’s where she went, they naturally started to dig down.

Melody knew the hole she’d fallen through to get to this underground hall was not very secure. Her foot had broken through the surface as she ran. Instinctively, she tried to duck into the side wall, hiding in the shadows as she’d done most of her life. The sudden movement shot another jolt of pain through her body from her broken ankle and she let out an involuntary yelp.

“Hush!” the tiny man hissed at her. “Do you want them to come crashing down on us?”

His voice was almost inaudible, but she could see the movement of his lips, white with anger and, perhaps, fear? It probably wasn’t all that often that he yanked creatures such as she into his private haven.

The brothers were still digging, any minute they’d break through. Melody knew they’d show her no mercy, but with her ankle, there was nothing she could do about it anyway.

“You should go,” she mouthed, motioning with her hand.

He just stared at her, head cocked toward the ceiling to listen to the furious digging.

Now that she thought about it, the brothers had been digging for far too long. They should have discovered the little man’s ceiling by now. There were four of them and they were made for this sort of work. It should have been simply a matter of seconds before they’d unearthed her and torn her to pieces.

She looked at the tiny man for explanation. Whatever he’d done when he waved his hand at the ceiling to seal the hole she’d fallen through must have been some sort of magic. Was she now trapped within the world of fairy?

She’d heard horror stories of creatures like her being forced into fairy to work as slaves and servants, but she was a creature of the air. She couldn’t possibly live long underground. Her face must have betrayed her horror.

“Don’t believe everything you hear,” the tiny man whispered. And they listened until the digging finally stopped.

Any day now the government would shut down this place and she would no longer have a job. Sarah didn’t care. She hated her job. If the strip club down the street would hire her in all her stretch-marked glory she would much rather work there, or anywhere for that matter.

Sara’s cousin worked as a gutter at the meat packing plant, she was in charge of using the bone saw to open the cow while another factory worker cuts away the innards and pushes them down the belt.

‘Maybe they will hire me when this place closes’ she thought as she shoved the feeding tube down the duck’s esophagus and pressed the feed button. The choking sounds the animal made along with the scraping of the tube in it’s throat made her gag as usual.

‘Poor Duck’ Sarah thought as she removed the tube. This time she tasted ble in her throat as the duck choked up the food it’s body couldn’t keep down.

‘Fucking foie gras’ she thought as she forced the tube down the next fattened ducks throat and pressed the feed button.