Welcome! Today dk Levick is stopping by on his whirlwind blog tour for his new novel, Bridges. Now, if you’re expecting a book review, or an interview, then you would be wrong. Mr. Levick’s already stopped at ten blogs and will stop at fifteen more after this. All of which will do much more interesting reviews or interviews than I. 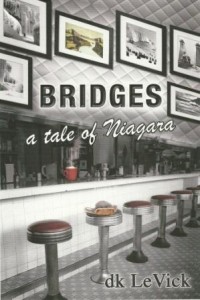 So, in Write Me! style, we’ll just have a little fun and throw in some 5MinuteFiction!

When a faded picture sets in motion a perilous journey for five young men, they not only encounter harrowing adventure in the forbidden Niagara Gorge, but are forced to confront the swirling illusions of the world they knew changing their lives forever.

‘Bridges’ brings together a series of historical events, in a twist of mystery and revelation with a group of 1962 teenagers caught up in the complexities of a changing world around them, exploring the questions of all peoples of all times. 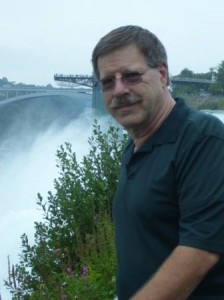 ”Being born and raised in the Niagara Frontier, I grew up on the Upper Niagara River and spent my formative years as a ‘river rat’, not in awe, but in fear of the mighty Cataract, viewing it as a threat to my Upper river escapades. More than once, we barely escaped the swift current while tubing down the river or fishing Navy Island in a rubber raft.

The Falls was to be avoided at all costs. That perspective changed the first time I went down into the gorge below the Falls (during summer of course — I wasn’t as crazy as the ‘boys’ were to go in winter). There, like Saul on the road to Damascus, I was overcome by the wonder of the river and consumed by the mystery of it.

Focused on raising a family in Niagara, I wrote for myself over the years. This story, now I give to you. I hope you enjoy reading it as much as I have in writing it.”–dk LeVick

Now, you might have noticed, dk Levick was our guest judge for this week’s 5MinuteFiction. He also agreed to guest judge a SPECIAL EVENING EDITION of 5MinuteFiction. That’s right. For everyone who could never participate because of the time, this is your opportunity. Thursday at 6:00 pm EDT, we’re doing 5MinuteFiction. Post’s going up later, but in the meantime, show this man some love. Have you checked out Bridges? Do it. Now. I’ll wait.

OK, I won’t actually wait, but I’ll give you a pat on the back when I see you later for 5MinuteFiction.

BUT that wasn’t all! Did you think that was all? Oh no. Because dk Levick also participated in 5MinuteFiction Tuesday, behind the scenes at my request. He didn’t know the prompt any more than the rest of you did. So at 1:30 he saw it, wrote it, and then emailed it to me. I’ve been saving it for you. From the prompt “ice,” in only five minutes, he gave us the following.

He’d lie awake, chilled from the cold sweats that troubled his infrequent dozing. He couldn’t recall the last time he’d had a sound night’s sleep. Instead, his mind swirled and spun from fear and terror, an out of control kaleidoscope while his body tossed and turned in the nightly battle with the blanket.

Lying thus, in his bed three nights ago, he was at his lowest point ever; a heavy cloak of despair suffocating him. Next to him Maggie’s broken breathing competed with the crying wind outside. There was no peace or joy in his world. All hope had forsaken him. He was alone and felt alone. Alone, fearful and angry, he couldn’t understand how or why his life had crumbled apart so badly and so quickly.

The moonlight filtering through the ice-laden branches thumping outside the window played an erratic waltz across the ceiling. Tommy lay still, staring at the overhead fan, watching the blades revolve, ever so slowly, round and round, casting alternating shadows over the dancing moonlight on the ceiling – flash – flash – flash.

Ignoring the fan, the shadows stopped flashing between the blades but remained fixed in place on the ceiling. They began lengthening, moving down the walls, growing longer and longer, down to the floor, forming shapes, silhouettes ringing the room, each moving separately within itself – a circle of living shadows.

Tommy stared at the shadows as a thick fog of terror enveloped him. Afraid to move, his eyes darted from side to side, straining to see – not wanting to see. He watched the shadows as they gathered shape and form like dark, cold ice men and began silently parading around the room, slowly at first, then gradually picking up speed. A sense of dread, deeper than fear alone, came over Tommy and a putrid odor filled the room – the odor of evil. A circle of ice-demons danced around Tommy’s bed.

His heart racing, his body frozen, breath coming in large clouds of cold exhaust, his eyes shifted and bulged as they followed the circle of demons. The sound of Maggie’s breathing was lost as the howling of the winds grew in intensity, no longer banging against the outside windows but filling his ears and head with their rage and vengeance from right here – inside his bedroom.

What’s happening? Oh God, what is this? Help me – please!

The circle of ice-demons spun faster and faster, a whir spinning against the winds that roared and swirled in the opposite direction over and around him.

No! No! This can’t be happening! Who are you? What do you want from me?

“It comes from within Tommy.”

The circle spun, faster still, becoming an indistinguishable blur racing around his bed. It grew darker, closing in around Bobby, tighter and tighter until the coldness brushed against his face and a vision of horror swept through him while the winds of hell ravaged over his quivering body.

“It comes from within Tommy. Seek within.”

Charles?  Is that you Charles? Tommy squeezed his eyes tight, shutting out this invasion to his sanity. Oh God, Help me! Are you here Charles? Help me! Save me!

Charles! It is you. You are here. Tommy opened his eyes and stared at the shadows circling his bed. The spinning blur slowed to a crawl, while the putrid wind blew lightly, coldly across his face. They were waiting, watching and Tommy knew what he must do.

I have to see Charles.

Please vote for my blog in the traffic-breaker poll for this tour. The blogger with the most votes wins a free promotional twitterview and a special winner’s badge. I want that to be me! You can vote in the poll by visiting the official Bridges blog tour page and scrolling all the way to the bottom to vote for Write Me!

You can win a free paperback copy of Bridges: A Tale of Niagara by entering your name and email address on its official blog tour page. The winner of the give-away will be announced on Wednesday, June 29 – be sure to enter before then!