Was that exciting or what? Sorry if this is a little late, I had to do some last-minute scrambling. I was sure I knew who was going to win, even started searching for the right picture to go with the victory post and then, in a last minute surge, Sarah Olson, @saraheolson took the prize! Well done! (This one was a fun picture search.)

Thanks again to  BigAl, @BooksAndPals for judging for us this week. He was a great judge to work with. Check out his site and his reviews, everyone, really. Now, without further ado, I give you winning entry. 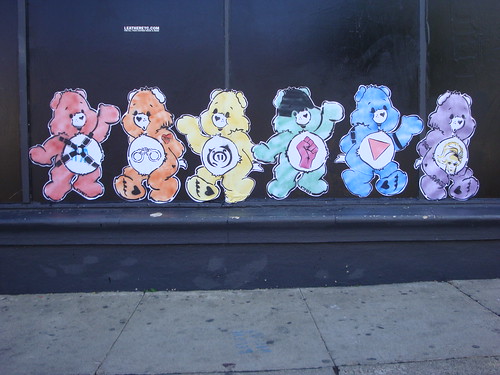 “You sure you want to do that, chief?”

Chief turned to me with his awkward glare before galloping down the hillside to his waiting army. Mohawk Barbie clutched the rains of her pink pegasus and screamed “WAR!” as she flew around in circles above the encampment. Leonardo grunted while he clashed his swords together while the other ninja turtles hopped lightly on the balls of their feet, ready for action.

Chief regarded his men carefully before he announced his plans. “War,” he whispered to the wind, which carried his command softly through the group. Their response carried much further as their cries were heard across the field of battle to their enemies on the other side. The Care Bears formed a long line across the valley, ready to stare their enemies down.

Chief nodded, knowing he would lose many men tonight, but he was intent on sending those damn bears back into the clouds where they belong.

“My care bears are going to destroy you!” Jaime giggles maniacally.

“No way, sis. Chief is taking you guys down!” Jaime laughs again but we’re running out of time, so I focus on the carnage ahead of us. We’ve got five minutes before we have to leave for school, and the battle’s not yet won.