Was it good for you? (Sorry. Frankly, I’m surprised I haven’t used that one before.) I have a headache this lovely afternoon and I think it influenced my entry. :-/

But look what y’all did. Again. Amazing. Congrats to you all. Whether you’re a finalist or not, you’re amazing for what you’re able to write in only five minutes.

But, as always, there are only five finalists. Our lovely judge this week, Kait Nolan, @KaitNolan, chose the following: 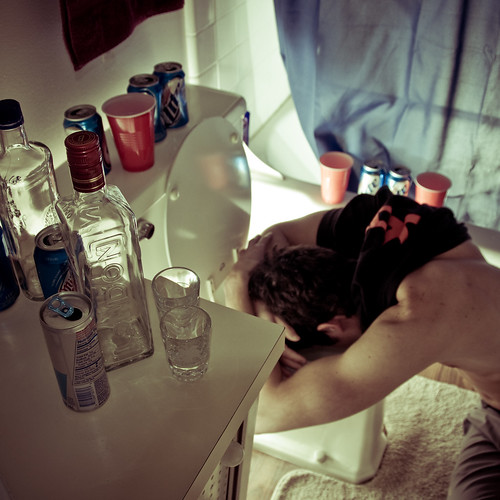 Congrats! So give their entries a read, give them a vote, and then be back here in the morning at 9:00 EDT when I’ll announce the WINNER!

Have you ever wondered, she asked, in a small voice, why the bad things are easier to believe?

Yeah, he said, turning his head slightly to look at her profile. But then I think, ‘The good stuff is more fun to contemplate.’

She pushed herself up on her left elbow and looked at his face lit by the pale moonlight. I like that about you, always have. It’s like, no matter how bad things get, you always manage to see things better. It makes me want to open up your head and take a look inside.

Don’t be silly, she giggled. Of course I wouldn’t. But maybe if I ask you enough questions, I’ll start to get it? Maybe?

He looked into her eyes, Sure, he said. Definitely. Ask me anything any time.

She dropped back onto the blanket and stared at the stars. Why? she asked.

Why anything? Why everything? Just … why?

Hmm, he murmured. Maybe it’d be easier if you did crack my head open!

The transfer went without a hitch.

Dr. Salzman watched as the guards retreated down the hallway. It was just he and a man dressed as a priest now.

The room was small, maybe nine by nine. There was a tiny rickety table in the middle. Two worn and scratched wooden chairs were positioned opposite of each other. In one sat the man of God.

The other chair, of course, was for him. The good doctor chose to stand.

“This is completely unnecessary,” he said. “I do not believe in your God, nor do I believe in the afterlife. Once they stick the needle in me, it will take ninety seconds and then my body will be ready for the maggots that will infest my coffin.”

The priest, an older gentleman with a shock of white hair and the girth that told a story of excessive food and drink, said nothing. The old man just looked at the doctor, waiting for him to continue.

And even the atheists continued talking.

“You are here to offer me final salvation. If I confess my sins to God, all will be right with my soul. Well I’m sorry to disappoint you Father. Since I have no soul, there is nothing that requires saving.”

The old man cleared his throat—a very wet and disgusting sound, not unlike the morning noises a heavy smoker makes.

“Ouch,” said the priest with a small smirk.

“I’ve admitted my guilt,” continued the doctor. “Thirty-two women in all. I’ve named my victims and led the police to their graves. It’s been a relief, actually. I’m ready to pay for what I’ve done.”

At this, the old priest’s smile widened.

“Payment is required, Martin Salzman—may I call you Marty? But you will not die today.”

“Oh?” said the doctor matter-of-factly. “Why? Has the Governor called?”

“No,” the priest said, shaking his head. “Nothing like that. I have need of your very unique talents. Take my hand, and together we will leave this prison.”

“Just like that? We’ll just waltz out of here.”

“Who are you and why would you free a psychotic like me?”

“Well, Dr. Saltzman. The ‘why’ I’ve already answered. I need a man of your talents. And I like your view of the afterlife. As to who I am…well, you can call me Mr. Scratch…”

“So what happened next, Officer Downs?”

“At that point it was observed that the defendant was not wearing any pants.”

“No sir. The defendant claimed that he had removed them after the horse had stolen his wallet.”

“And that’s the same horse that the victim was riding?”

“No. No, that was a different horse. I didn’t actually see the wallet stealing horse, but the defendant claimed that was the reason he was brandishing the machete.”

“Now, was all of this before or after the clown arrived on scene?”

“Well after. The clown had already left having lost his balloons, and made the second call to the police station informing us of the incident.”

“After the first call from the angry midget?”

“No, his was the third call. The first was from the man in the gorilla costume.”

“Did you know at the time he was in a gorilla costume?”

“I’ll withdraw the question. So by the time you arrived on the scene the defendant was wearing no pants, and was brandishing a machete at the victims horse?”

“When I arrived on the scene I pulled my gun and had it in a ready position. I told the defendant to put down the machete, let go of the balloons, and step away from the horse. I don’t think he expected a cop, because he turned around quite suddenly, which is why he tripped over the fountain, falling forward. He stumbled forward, gripping one leg in pain, which caused him to accidentally knick the horse with his machete. This caused the horse to kick him in the face and send him flying back towards the main body of the fountain. He struck the statue of the urinating boy head first before collapsing to the ground. At this point, the pigeons were finally able to get free from his shirt.”

“Did the defendant make any statement at the scene?”

“Let me check my notes. Yes. He made one statement.”

“Could you read it for the court?”

The yoga instructor maneuvered his body into this thing he called Dancer’s Pose — the sinewy lines of his long leg extended behind him and over his head, stretching and pulling.

“Now you,” he invited the rest of the class.

I stared at Kitty. “Ouch. He really expects my leg to do that?”

She shrugged, her brows drawing down into an exaggerated v shape. “I don’t know, man.” She cocked her head to the side and chewed her lip. “I may never be able to sit again if I try.”

The others around us balanced on a single leg, unsteady and wobbling. One brave soul grasped her ankle and shifted forward only to fall flat on her face, blood pooling on the floor below her mouth. The instructor fluttered around her with a towel, gesturing in the mirror and staring at me. “Continue!” he instructed.

The yoga guy still eyeballed me, so I bent my knee and contorted until the bony protuberance of my ankle slid into my hand. The foot I’d “planted” on the spongy mat wiggled, trying to keep my equilibrium. I slowly pulled my leg back, the burn shivering up my thigh. Extend. Extend. Raise the other arm and stare at a point near the mirror. Stare. Extend. Stare. Ext–

“ARGGGGGGGGHHHHHHHHHH!” I screamed, releasing my ankle and flailing while I listed to the right. My knee buckled, the pain replacing the burn, my body falling like a giant tree while I grabbed for something . . . anything. Kitty swore, her voice too close to my face, and I landed on something both hard and soft.

“Ouch!? You bitch. Get off me — I think you broke my ribs!” Kitty shouted, shoving with her arms and legs.

The yoga instructor’s hands hovered offer me as I untangled myself. “Breathe through the pain,” he instructed.

I punched him square in the gut and curled over him, gasping on the floor. “You breathe through the pain, dipshit.”

Perhaps my reaction was a little less than it should have been, after all it was a full onslaught of supposed state-of-the-art nuclear warheads that hit my exposed belly. “Ouch,” was what I said. I said it calmly and without much feeling. I did sting, admittedly but what did they expect? I’m an asteroid roughly twice the size of their moon. I can’t help the fact that I got pulled into a trajectory that put me in line with their planet. If I could help it I would.

The unfortunate thing about no longer being an inanimate object is that I have feelings. I don’t know when this occurred exactly. I think it was after I blasted through Gabingga Tsuyala. I only guess that because that is the first impact which I remember the name of. Something happened after that. I could feel the psychic energy off of some planets, I could read the future and see the destruction I would cause. It brought me great pain. I have been struggling with my emotions since I witnessed the gas creatures of Jinga-Jinga float and implode as their atmosphere exploded with my impact. I bounced off, changing trajectory again. I felt no pain, that time.

The next time I knew that I was on a path to destroy living feeling entities. I hoped that I would miss the tiny planet, or if I didn’t that it would somehow stop me from travelling further, but it did not. My feelings intensified, as if the thoughts and feelings of those that I destroyed clung to me, hoping to live on.

My new found self awareness did not translate into being able to move. I focused all of my energy on altering my coarse, but to no avail. I wished to die now, I have no reason to live. The beings on this blue planet are the first that have attempted to protect themselves, they have known I was coming before I was even aware of them. I knew what would happen, I would glance a soft blow, pushing their planet but a slip further from their sun, but enough that they would suffer in cold and starvation for centuries.

As another flurry of explosions crackled upon my chest I prayed that at least one would end my suffering so I would not feel theirs.