Judge was on the ball today and so very prompt about returning the results. I love working with judges like that.

Did you like the prompt? I don’t know what possessed me to pair that sentence with that picture.

But you all did admirably with it. Now who are the finalists? Well, they’re: 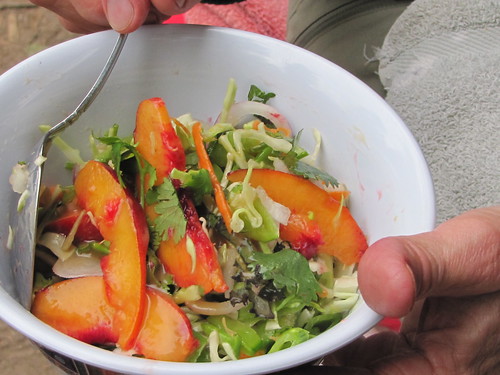 And there you have them, folks. Congrats to all the finalists! So now what? Well, you read their entries below and then vote in the poll. That simple. Send everyone you know to read these fabulous authors. Then come back in the morning at 9:00 Eastern time to see who WINS!

It was green and orange and the most frightening thing he’d ever seen.

Josh turned to his wife and asked, “Do I have to?”

She gave him a searing look. “We talked about this.”

With a sigh, Josh put on the cartoonish teddy bear costume and steeled himself for battle. When he burst through the door, the crowd of four-year-old girls rushed him with squeals. They patted his belly, tugged at his hands, and demanded that he crawl around on all fours. When he objected, Josh’s wife shook her head in warning.

Josh dropped to his knees and singled out one little girl. Her eyes lit up with excitement as she clambered onto his back.

“Thanks, Daddy,” she whispered.

Josh smiled. Maybe being a teddy bear wasn’t so bad, after all.

It was green and orange and the most frightening thing he’d ever seen. Seriously. Steak Diane wasn’t supposed to look like this. Paul glanced up at his wife, who was hovering with a hopeful look on her face. She had worked so hard at her culinary classes but it seemed that it was all for naught.

Plastering a smile on his face that he hoped was believable; he leaned over the plate and took a big whiff. The noxious odors coming from the plate almost made him add to the colorful mixture on the plate, but he held strong for his dear wife.

“This smells great, Katie. I can’t wait to try it,” he said, without a drop of insincerity.

“Really?” she said, her eyes brimming with happiness. “It doesn’t look quite like the picture from the recipe, but I followed it exactly,”

Katie sighed happily and sat down across from her husband. Paul cut into the pile on his plate, not sure where the steak actually was, and took a bite.

It looked better on the plate than it tasted.

It was green and orange and the most frightening thing he’d ever seen. I could tell by the way his face contorted as though I’d set cow dung or poison in front of him.

“Mom!” The boy could stretch that one-syllable out until he ran out breath whining it. “You know I hate carrots.”

“Truly, Aaron, it isn’t as terrible as you might think. Just give it whirl.”

“I don’t want to give it a whirl. It’ll make me hurl.” He paused, his light brown eyes brightening. “Hey, mom! I rhymed.”

“You sure did. Now eat up and try not to hurl, okay? That’d make a huge mess.”

He gulped, audibly. I thought that was something only cartoon characters were capable of, but no; my son gulped loudly enough to startle the dog. He stared down the mishmash of carrots and peas, coated in a brown sugar reduction that I was certain my little man would enjoy . . . if he would just take a bite. His eyes darted warily between me and the plate, seemingly trying to decide how likely I’d be to slip something fatal in his dinner.

As the fork rose, my breath caught in my throat. I always felt this panic as he tried something new. Would tonight be the night that he would finally add something to his pitifully small list of approved foods or would it be another disaster?

He chewed, his look of horror turning to delight and I breathed a sigh of relief. But my relief was short lived as I heard his plate moving away from him.

“Tastes too good,” he said shaking his head. “Must be something funny in it . . . just can’t take the chance, mom.”

It was green and orange and the most frightening thing he’d ever seen. It caused Ed to jump, and move around Jeanie.

“What?” she said, trying to turn around to look at him.

Jeanie turned to see the woman, in her green dress and orange sun hat stomping down the mall walkway in their direction. She looked ready to chew rivets out of a steel girder.

“You’re hiding behind me from your ex-wife?” Jeanie said, her arms dropping to her side. “You’re such a bastion of manliness.”

“Edward!” the other woman screamed across the mall. “Don’t try to hide, I see you behind your skinny little bitch.”

“She did not just call me a bitch,” Jeanie said, gritting her teeth.

“She did,” Ed said. Suddenly, he stood up and pushed Jeanie out of the way. It was one thing for Clara to insult and try to bully him, but he would be damned if he was going to let her do that to Jeanie.

“That’s right,” Clara said, stomping up to them, “get out of the way, you tramp.”

“What did you say?” Clara said, her volume rising. People were starting to look at them.

“I said shut up,” Ed said. “You no doubt came here to pester me once again about my alimony check. Fine. You want to yell and insult me, fine. But you leave Jeanie out of this.”

“Take it up with the court,” Ed said. “I paid them, the same as I do every month, at the same time every month. If you haven’t got it yet, it’s not my fault.”

Clara sputtered, her face turning red. “How dare you…”

“No,” Ed said. “How dare you. I’m tired of all this, Clara. You’re a bully, and I’m not going to be pushed around anymore. Get out of here, and take your issue to the court.”

Clara stomped away; her face beat red, sputtering away. Jeanie looked up at Ed, smiling. Then, she saw him deflate and tremble as he sat down into a bench.

“That was the most terrifying thing I’ve ever done,” he said.

“And I’m so proud of you for it,” Jeanie said, bending down to kiss him.

It was green and orange and the most frightening thing I’d ever seen. It sat blinking at me, squelching in the soil that had turned my formerly tidy garden into a wreck of tangled been vines and broken tomato stems.

All this time I’d wondered what was getting at the lettuce — devouring each head down to nubs. The carrot tops had likewise been demolished, the yellow squash eaten past the fruit itself and up to the elbows of the spiny stems.

“What’s doing this?” I’d asked myself again and again, as I’d tested out remedies for slugs, squash borers, checked leaves for late blight, searched under potato leaves and delicate white pea blossoms for Japanese beetles. Nothing in my Seeds of Change catalogs or my Audubon guides had been any help, nor had the slug traps, the aphid sprays.

It just hadn’t made any sense. Eating the spicy greens *first* out of the mesclun mix should have been my first clue that I was not dealing with some ordinary rabbit or other mammal. They usually steer of the mustard greens, the arugala, and anything else that bites back.

And now here it was, this green and orange *thing,* with its shiny plaslticine skin, its eight fuzzy eyeballs grouped together on its — could you call that a forehead? — and it’s clawed feet flexing themselves luxuriously in my well-matured compost. All these months of mixing manure, the years of composting, the early morning weedings and waterings crammed in before I raced to work. All of it gone, down the slimy lipstick-mouthed creature sitting before me.

It was hard enough to be a vegan on my salary without something destroying all my hard work. What the hell was I going to eat, now that my winter squash and potatoes were in ruins?

“Sorry,” it burped and smiled.

I hit it with the spade I’d been holding in my right hand, using every ounce of strength I possessed. Fuck veganism. This would be dinner.