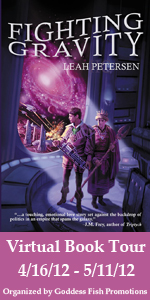 Sorry it took me so long to get to this part. Let me assure you, it had nothing to do with a lack of appreciation for those who stopped by and said hi or participated in the conversation on the blog tour. You guys rock my world.

I promised the following prizes for two lucky commenters:

Also knit by me, a sort of random (let’s call it a coaster) knit piece where I tried to knit the symbol of the IIC, the school Jacob is taken to early in the book. Opinions vary as to whether it looks like what I intended it to. (OK, by that I mean that no one but me thinks it looks like what I intended it to.) So if you were wondering, it’s a galaxy cupped in a hand. This piece is less useful than ridiculous. But, hey, the winners will be two of exactly three people who have one. So, if I ever become famous, there you go, it’s something weird, but special.

So, who did random.org pick as the winners?

Catherine Lee: Comments all over the place but the one that got the win was on Lisa Haselton’s Reviews and Interviews.)

Congrats, ladies! I’ll be in touch about sending out your prizes. Thanks again to everyone who stopped by, to the fabulous hosts, to those who reviewed the book, those who bought it, to Goddess Fish Promotions  and in general to anyone and everyone. 😉