World Fantasy Con, Toronto #WFC2012 Will you be there?

I’m really looking forward to it, particularly since my book launch took place in Toronto as well and I met a lot of great people who will also be at World Fantasy. Yay!

I imagine I’ll be spending much of my time at the Dragon Moon Press table in the dealer’s room where we’ll be selling, among other things, When the Villain Comes Home, featuring new fiction from Mercedes Lackey, who will be at the con and can sign your shiny new copy! There might be a few copies of Fighting Gravity too, and me with my trusty pen. So stop by and say hi, meet the other great Dragon Moon Press authors, maybe grab yourself a book or two.

Dragon Moon Press is also hosting a pub night Saturday November 3 at 7:00 pm at the nearby Fox and the Fiddle. Find all the details here. Mix and mingle with some great authors, editors, and just all around cool people.

I’ll be on the program. Friday morning you can find me here:

How is Urban Fantasy written for a YA audience different from its grown-up counterpart? How sanitized, if at all, does something written for a YA audience have to be? How much sex/violence is, or isn’t, appropriate or expected? Are the stakes different in YA Urban Fantasy? A fascinating difference between adult and YA Urban Fantasy is that the former often features an established heroine/hero who is comfortable in a magical world, whereas the latter usually features protagonists who have just discovered their link to a world of magic, and are inexperienced within its boundaries. How does this affect/influence the characters, and the course of their journey?

I’m excited! My current WIP, when I’m not working on the sequel to Fighting Gravity, is a YA fantasy (not quite urban, but some interesting crossover elements are developing) and, of course, I ALWAYS have an opinion on stuff, so I’m looking forward to a great discussion and to meeting my fellow panelists. 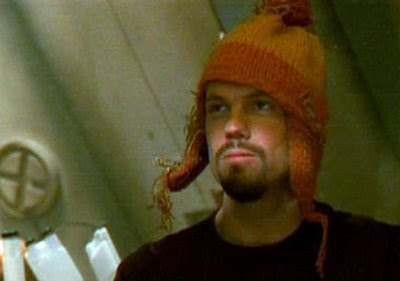 So are you going to be there? What are you looking forward to the most? Make sure you say hi while you’re there. I’ll probably be the easiest person at the whole con to pick out of a crowd, what with the bald thing and all. Though I did knit myself some cool hats for the occasion. Not least of which is this one: