Gravity Won and Other Highlights of #WFC2012

It’s been days since the con ended and I’m finally getting a chance to sit down and do my wrap-up post for World Fantasy Con in Toronto. I had a minor dispute with gravity on Friday morning of the con and it won hands (and feet) down. So I’ve spent the first day or so back in the states dealing with purple-sausage-foot which is much better now, thank you.

Idiot injuries aside, it was a great con.

I arrived Wednesday night in time for a party at JM Frey’s house, which was lots of fun. Jess is a wonderful host. We played a customized-for-the-sff-crowd set of Cards Against Humanity which led to some hilarious combinations. I met there Clint Talbert, a shiny new Dragon Moon Press author who has a story in When the Villain Comes Home and a novel coming out in 2013. Lovely man, in more than one sense of the word, so that was very nice.

Gabrielle Harbowy and I stayed over that night and on Thursday about midday we set off for the con hotel with several boxes of books to stock the  Dragon Moon Press table in the dealer’s room. I didn’t get to any of the programming on Thursday as my afternoon was spent setting up our table, meeting and coordinating with my fellow DMP authors, and so on and so forth. One highlight of the afternoon was, upon registering, we were directed to the book room where we were to pick up our bag of free books. There we found, not just a bag of free books, but an enormous, heavy bag of really cool new releases by authors whose names made me squeeeee. YAY! 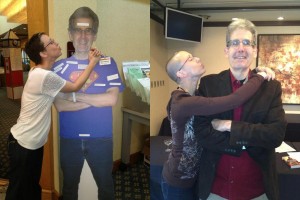 I cornered Scott Edelman in the hallway later and he very nicely agreed to take a picture with me to compliment the one I had from Readercon this summer. (He’s a lot taller in real life than his avatar at Readercon was.)

The other great thing that happened that day was that I got to meet our newest DMP author, K.T. Bryski, whose debut novel, Hapax, was launching there at the con. She’s really sweet and it was lots of fun hanging out with her all weekend.

That night, our room tried to kill us. That is, we found fresh blood spatters on our sheets when we went to get in bed, and then, after the helpful young man replaced them, one of our lamps caught fire. Thankfully we survived, but that whole fiasco is a blog post in itself.

Friday was a big day for me, I was one of the panelists for the 10:00 Young Adult Urban Fantasy panel. The moderator, Joel Sutherland, was great, the panelists intelligent and well rounded, and I got to sit beside Charles de Lint who is really a terribly nice man. Other panelists included Isobelle Carmody, Alyxandra Harvey, and Holly Black. The conversation ranged from how YA UF differs from the adult variety, how much violence, sex, etc. can and/or should be in YA, writing to a YA audience and also how marketing often determines what is YA and what isn’t, rather than the author. It was well run and the audience followed up with good questions as well. It was a great experience.

Afterward, Fiona Patton came up to me to follow up on the comments I’d made about the fact that my novel has YA age characters who are gay. She had a great story about how a young nephew had recently come out to her and it was heartwarming and encouraging to hear about a kid who had a safe person to come out to and an environment that promised to support, not judge him for who he is. Yay! And one of the really good things was that I couldn’t see her nametag when we were talking, so I had no idea who she was and therefore didn’t squee or get nervous or anything but talked to her like an intelligent(ish) adult. She also came by the DMP table later and bought a copy of Fighting Gravity and I did squeee then, once she was gone. 😉

That’s about it, I think, except for the fact that I stumbled coming down off the stage, actually during the panel in front of everyone in what is an embarrassing Leah-acted-before-she-engaged-her-brain moment and the end result of that was a purple-sausage foot for the rest of the weekend and lots of hobbling. A good bit of the rest of my con was ruled by the Leah’s-not-exactly-mobile situation, but I spent that time at the DMP table in the dealer’s room where I met great people and sold some books while hanging out with my friends. I’m pretty sure that’s the whole point of these things, anyway, right? So, mission accomplished.

And Ed Greenwood himself took me to Walmart and bought me a cane, so it was totally worth it.

On Friday at 5:00pm, I attended the New Twists on Accepted Myths panel that featured not only special guest Mercedes Lackey, but also fellow DMP author and good friend Marie Bilodeau. It was an extremely informative panel with a great moment in which Marie, in response to an audience member’s comment along the lines of how we could use existing myths WITHOUT respecting the root culture and that being just fine, Marie replied “well I could come down there and bitch slap you, but…” It was one of the best moments of the con. I wish I had it on video.

Friday night was one of the highlights of my con. That night, up in our room, Gabrielle Harbowy, Clint Talbert and I played a game of Dungeons and Dragons with Ed Greenwood as our Dungeon Master. If you know anything about D&D, you know how cool it is to learn the game from the creator of the Forgotten Realms. It was so much fun. I’m no virgin when it comes to RPGs and have years of WOW under my belt, but I had never played D&D in any form. It was so obvious how this game became such a thing with WRITERS not just gamers. It was a shared story experience and, particularly in private among good friends, it was an absolute riot and probably got a little more, ahem, interesting than it does on the con floor. Let’s just say I did not expect the device holding the Drow prisoner to be a butt plug. Which about sums up the game, really. That and the frantic moment when Gab, our warrior, had to save my dong from the tentacle monster I’d unwittingly pissed off by peeing on him. (Well I had to try out the equipment…)

And there went Friday. Literally; we finished the game at 2:30 am Saturday but all the next-day sleepies had been worth it.

At noon on Saturday, I went to the Brandon Sanderson reading where he treated us to the opening of the last WOT novel, coming out in January 2013, and also a scene from the next Stormlight novel that he’d written only a few days before.

I did also make it down to the Mercedes Lackey & Larry Dixon interview. I got there early and to my delight, realized that there were ten more minutes of the Charles de Lint interview and for that time, he had chosen to sing along with his wife some of the folk music they’re known for. It was AWESOME and I was totally not expecting it so that made it even better.

After that, Misty and Larry sat down for their interview and Misty put up a sign facing the audience that said YOU ARE DOOMED! And that tells you about the panel, actually. They were funny and irreverent and it was fascinating to hear how they manage all their various collaborations and creative projects.

Saturday night we had the launch party for Hapax at the Fox and the Fiddle across the street from the con. There were tons of people there and K.T. Bryski, who’s like 90 pounds soaking wet, read an excerpt loud enough for us all to hear. It’s a great book, by the way; I’ve already finished mine.

Being insufficiently mobile, I volunteered to man the book table at the party where I sold lots of copies of  Hapax and several other DMP books. I met Katie’s friends and family too, and as a rule, they’re all lovely people so I’m very glad I did. Congratulations, Katie!

Sunday morning I started with Non-Western Fantasy, which I wanted to attend anyway, but it offered the additional bonus of having on the panel Amanda Sun who I’d met through Authoress Anonymous’s wonderful group of Success Stories and got to see at intervals throughout the con. She had some interesting perspectives on different cultures in fantasy lit, as did the rest of the panel. Now I’m really looking forward to reading the ARC of Amanda’s upcoming novel, Ink, to be released in July 2013.

I got to catch pieces of the next panel, Part Seen Part Imagined and hearing the long-time pros in the industry like Ed Greenwood and Larry Dixon discuss cover art was really enlightening.

I did not attend the banquet that night, and got the results of the World Fantasy awards on Twitter like most people because I was minding the DMP table in the dealers room in the last hours and helping pack it up and clear out.

There were lots of goodbyes that night to the friends old and new who were heading out that evening, there were beers with those who stayed over Sunday night, and then Monday morning I bid a sad goodbye to Gabrielle, Toronto, and WFC 2012. At least I have Ad Astra in Toronto to look forward to in April. See all of you then!

P.S. Those airline-employee-powered wheelchairs are like a magic pass through the airport. You really have to try one sometime. And, yes, I was a good girl and went to the doctor Tuesday afternoon to have my sprained ankle diagnosed and to acquire pretty new crutches so I can be ready to do it all again at the next con.