So, I’ve been just dreadful about blog writing, updating, all that nonsense lately. I’d like to say it’s because I’ve been doing nothing but writing, but that would be a lie. I HAVE been busy though, with about a bazillion different things. Some of those things have more merit than others. 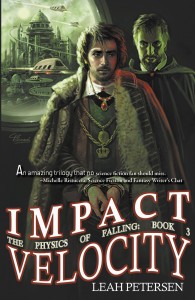 But Impact Velocity‘s just come out, so that’s cool, right? Have you checked it out yet?

Jake has finally found peace and a family with the man he loves. But when the unimaginable happens, Jake finds himself on the run with his greatest enemy and the man who betrayed them both.

If he can’t find a way to bring down the man who now wields the power of an emperor, he’ll lose not just his own life, but his daughter’s as well.

So, the lovely and talented J.M. Frey, Lambda Literary Award nominated author of Triptych, has tagged me in this blog hop thing. Looks like fun. Check her out and her post here.

Now for my part in this party. I get to interview myself. Here goes:

Not going crazy? Oh, you meant writing? Well, I’m working right now on a YA scifi. It has no title yet so right now I’m calling it Snow White and the Seven Genetically Engineered Teenagers. It’s fun. 🙂 I have a YA fantasy I’ve completed but it’s being shopped right now and doesn’t have a home yet. Soon, I hope.

2) How does my work differ from others of its genre?

I think a lot of that depends on how you’re defining genre? Broadly? Well, in both fantasy and scifi I try to always write characters that aren’t straight, white, whatever, in worlds that look disturbingly like our own. The Physics of Falling took that farther than I had in the past, which is to say, not terribly far because I’d never really considered gender issues in my writing before. So simply writing a gay or bi character was a new thing for me. These days I find myself writing characters in a lot more interesting places on the gender scale. And the fun thing about that when it comes to scifi and fantasy, is that you can make it something that is integral to your world for all kinds of interesting reasons.

Other than that, I have always written character based stories, even when it’s hard scifi.

Because it’s fascinating. Because anything’s possible. Because I live in the real world all day long and find the process of seeing how far from it I can get with my character and worlds to be something that is very satisfying to do. And when it comes to queer characters, because I know what it’s like to be different, or to be perceived as “wrong” or “flawed” by the “normal” people. I want to write about and for people like us.

4) How does my writing process work?

I wouldn’t say it works… Ah, the question that drives all my stress. How I got to be a person who works a nine to five, freelancing on the side, AND writing novels, I’ll never know. I don’t do organization and I don’t handle stress well. WTF, right? Somehow it happens anyway. I’ve learned about myself that I don’t accomplish much just sitting down to write because it’s “time.” So I don’t have a schedule. When I’m seriously in a writing-the-novel phase, I will set myself daily goals, but I’ve discovered about myself that I need to write in my head before I write anywhere else. So I’ll spend at least as much time writing in my head as I do sitting at the keyboard. Once I sit down to actually “write,” I’m really just transcribing. Oh, new and unexpected things can come out at the keys, but that’s only when I’ve brought something with me to the table.

Once I’m really down and dirty, ready to tackle that novel, I make up for weeks or months of not writing by writing a LOT all at once. For every novel, I take at least one “writingcation” in which I go out of town and just write all weekend. My record is just north of 30,000 in three days. And for that one there was fourteen hours of driving to account for. Still, it’s what works for me. Some good stuff has come out of such panic-writing. It’s definitely gotten the novels written.

Well, folks, there it is. Everything you didn’t know you wanted to know about me. 😉 Here’s where I’m supposed to tag two other authors, but, since I managed to flub this up and get the dates all wrong, everyone else is taken. Instead, I’m going to link you to the amazing Dragon Moon Press authors. I first met most of them three years ago when I went to Toronto for the launch of Fighting Gravity. They’re talented, fun, and just some really good people. You should check them out. Fair warning, you may find yourself buying books. But, that’s why we’re all here, right? Enjoy!

K.T. Bryski: Fantasy author of Hapax, and something Victorian and creepy and awesome sounding coming soon.