What a White Woman Learned at the Women’s March

I was in Washington, D.C. this weekend for the Women’s March on Washington. It was an amazing, exhilarating, motivating experience. It was everything I hoped it would be, even though I didn’t get to march in the official group because there were just too many of us. I marched with the tens of thousands of others spilling onto other streets. Everywhere I turned there were more and more people and we were all there, excited, and part of something that moved us all in the same direction physically and in spirit. 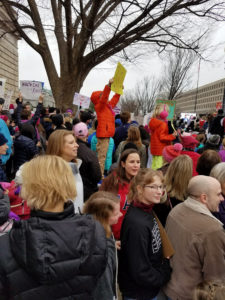 That said, I’ve seen a lot of commentary since about how White women made up the majority of those who attended. Now, there are a lot of purely practical reasons for that. White women make up well over 50% of the women in the United States, and that isn’t projected to change until 2050. Minority women are paid less than we are, incarcerated more often, and more likely to have any number of the day-to-day struggles that prevent making a long trip, or even taking a day off, to be part of something like the March.

And yet, what I saw on the stage at the rally, in the makeup of the organizing committee, the speakers and entertainers, gave me an amazing feeling of hope. Because they were overwhelmingly NOT White. I watched black women give impassioned speeches about their struggles. One that sticks most in my mind was Tamika Mallory speaking of black slaves nursing their infant owners. As a woman who has held my own children to my breast and fed them from my body, it was incredibly humbling to understand a subjugation so visceral and basic that I knew on an academic level but had never connected to life.

I watched Sophie Cruz, a six-year-old Immigrant Rights Activist, move the crowd to tears with her impassioned speech, surrounded by her family, and cried even harder when she repeated the whole thing in Spanish that I couldn’t understand nearly as well as she understood the language I speak every day. I listened to women who had faced almost every imaginable struggle that had never and would never come my way because I’m straight and cis and White.

The marchers may have been more White than not, but we were being led by the women who have come behind us in every way in this nation’s history, who have been hobbled by chains both physical and intangible that we could never understand. 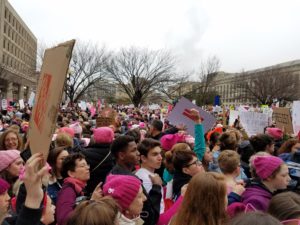 The view from pretty much everywhere.

I’ve read much over the last few years about White Feminism ignoring women of color, and I believe and have seen it myself. But the Women’s March, as I experienced it, was a repudiation of that; and I felt humbled and grateful that these women were strong and smart and compassionate enough to know they spoke primarily to women who had often ignored and pushed them aside in order to attain our own goals.

It hurt my heart when I saw it pointed out after the fact that the Women’s Marches being so overwhelmingly peaceful and unobstructed had as much to do with law enforcement’s view of the racial makeup of the crowd as it did with our actions and intentions. And yet I cannot and do not want to contest the conclusion. I don’t doubt it for a second. It made me ashamed, too, that there weren’t more of us at the Black Lives Matter protests, protesting the Dakota Access Pipeline, and any number of important events and struggles that I probably never even knew about.

But in the midst of the reminders of how we’ve failed in the past, and how far we have to go, I found hope and courage and beauty in the fact that the women who brought us together, who spoke and sang and led us in chants and in simply moving our feet as an act of protest, were the women who have often been left out of our history but represent our future.

Black women black women voted at a higher rate than any other group of women, and they voted almost unanimously against the man that so many white women came to protest, even though we let them down when 53% of White women voted for oppression, degradation, and subjugation. May these brave and beautiful women continue to be there, in the front lines, in the places of power, in the lessons we learn in school and the everyday acts that create our present and drive our future.

I passionately supported Hillary–in part because of the work she has done on behalf of women who did not look like herself–but she did not win the Electoral College and thus the Presidency. We did not get our first female POTUS this election. But we will.  And I fervently hope our first female POTUS is not White. I will happily walk behind her and all other women of color, listen to and learn from them, and support them every step of the way.