This Scares The Crap Out of Me: The Journey to My Logline, Revealed.

Ugh. Loglines. Authoress over at Miss Snark’s First Victim is running the pre-Baker’s Dozen logline critique sessions right now and I’ve been reading and adding my two cents and I’m reminded of how much query and logline writing sucks balls. So I’m thinking a concrete example of how you can go wrong, and then distill it down to something right, might help others going through this hell. 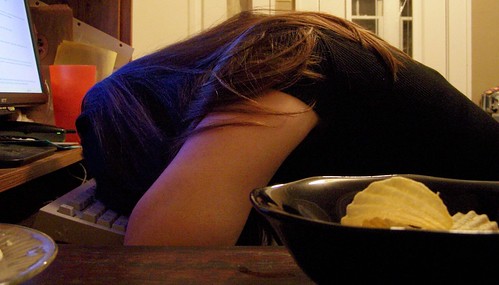 So what’s a logline? Essentially, it’s the pitch for your book distilled to one single sentence. Holy… Well, like most people, I started from the query and worked down. Want to see?

Now, I’ve never publicly owned some of this because it’s so embarrassing. But, in the spirit of helping others, and because this way you can laugh at me when I can’t see you doing it, I’ve decided to share my full novel-pitch evolution. That’s right, you get to see the bad stuff I actually put my name on and emailed to people.

Disclaimer: I’m not showing you the first one I wrote, or even the tenth. The very, very first stuff was pure garbage. Even I knew that. I worked and worked it until I got one I thought was pretty good. Here it is:

You can never trust anyone in authority. Jacob Dawes always knew that; but he fell in love with the Emperor anyway. The dangerous mess his life has become really is his own fault.

Jacob is nothing and no one in the Intergalactic Empire where birth, wealth, and social status mean everything.  But when his incredible genius is identified, he becomes a valuable commodity to the Empire and he’s taken to the Imperial Intellectual Complex.

The Empire may want him, in spite of his origins, but the scientists and scholars at The Complex don’t.  His groundbreaking discoveries in physics overcome prejudice, and earn him the favor – and friendship – of the Emperor.

In time, the friendship becomes more and Jacob, cynical and wary of anyone in power, is now the Emperor’s lover.

The Emperor’s favor isn’t a protection, and Jacob soon finds himself embroiled in dangerous political games he’s ill-equipped to play that may cost him the man he loves, and even his life.

Wow, that’s long. Well, it’s a complex world and a complex character with complex problems. There’s only so much you can cut out, right? Here it was after I got some seriously good quality (and professional) help with it. This is the version that I queried with that led to the sale of the book:

Jacob Dawes’ scientific genius got him out of the slums and into the Emperor’s bed; but when a very public mistake gives his rivals an opportunity to be rid of him, Jacob discovers that fighting his own execution would mean betraying the man he loves.

Well that’s a bit less, isn’t it. Barely even a pitch, more like a logline. It got me a book deal, though.

Here’s the back cover copy of the published book:

When Jacob Dawes is Selected for the Imperial Intellectual Complex as a child, he’s catapulted from the poverty-stricken slums of his birth into a world where his status as an unclass is something no one can forget, or forgive. His growing scientific renown draws the attention of the emperor, a young man Jacob’s own age, and they find themselves drawn to each other in an unlikely, and ill-advised relationship. Jacob may have won the emperor’s heart, but it’s no protection when he’s accused of treason. And fighting his own execution would mean betraying the man he loves.

A brilliant young physicist is accused of treason; to fight for his own life, he’ll have to betray his lover, the Emperor.

Well, sure. But that’s for the “oh, tell me more” version of a pitch, or the one you use when you’re querying. That’s not what a logline is. You often hear it called the elevator pitch. You find yourself on the elevator with your dream agent and she asks what your book’s about. That’s not the time to recite your full query from heart. That’s where you use a logline.

What do you NEED in a logline?

A brilliant young physicist is accused of treason; to fight for his own life, he’ll have to betray his lover, the Emperor.

Decision: Betray the man he loves or not.

It can feel impossible to convey what is unique and interesting about your story without at least some of the trimmings. But there’s no room for that in a logline. Every word counts. Make one word and the one you put next to it convey whole volumes of information. Well you can do that, right? That’s what you do! You’re a writer!

Yes, but one of the hard things about writing a logline isn’t that you don’t know how to write a sentence, it’s that you have to learn to see down to the bare bones of your own story and find the very, very few things that truly matter in conveying an idea of the story in one breath. That’s really really hard for the writer because you are so close to the story you usually can’t see it clearly. That’s why things like Authoress’s logline critique sessions are so helpful! It’s HARD to be told you’re wrong, that what you worked SO HARD on doesn’t work, that your beloved Very Important details aren’t important to anyone but you.

(Check out, too, Authoress’s own post on loglines. As usual, the comments from the community are helpful as well. Don’t skip them.)